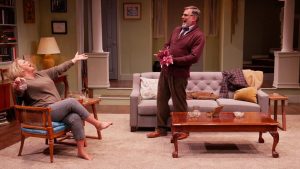 Don’t fear seeing “Who’s Afraid of Virginia Woolf” at Theatre Workshop of Nantucket. There’s a lot of bite in this impressive production of one of the greatest plays of the 20th century.

For fans of daytime TV serials, the “soaps” as they’re known, it’s a chance to see vivid and engaging performances by award-winning actors Kim Zimmer and Robert Newman, the colorful pair of Reva and Josh on the long-running CBS drama “Guiding Light.”

Edward Albee’s dark masterpiece puts him and the play in the pantheon of modern American Drama with Eugene O’Neil, Tennessee Williams and Arthur Miller. Despite it’s three-hour length and unrelenting acrimony, this faithful rendering of Albee’s masterful script, with fine performances by four skilled actors, demands that an avid theater-goer not miss it.

When considering a staged production of “Woolf,” let’s dismiss with the elephant in the room: a bright pink elephant in the context of the play’s alcohol-fueled action. Don’t expect a replication of the famed award-winning movie version. In truth, many prominent actors have played the roles in many different major stage productions. TWN’s rendition of “Woolf” would rank among the best. 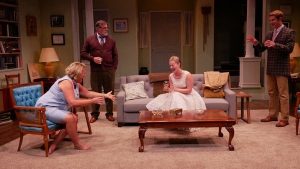 Woolf” presents a gloomy and cheerless picture of a marriage built on bitterness and humiliation. Martha is daughter of the president of New Carthage College; George is an assistant professor of history.

In the names George, Martha and New Carthage, Albee suggests the two are archetypical, classic examples of marriage, whenever the time and whatever their depressing state of affairs. The time is the late 1950’s to early 1960’s (“Woolf” made its Broadway debut in 1963), but this production feels alive in the present.

The couple has left a party at the home of Martha’s father, and, despite the late hour of 2 a.m., Martha has invited a young couple, new biology faculty member Nick and his wife Honey, to their house for after-party drinks. A boozy night follows, continuing until near dawn and over the course of three acts. 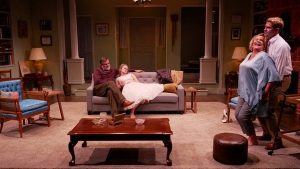 The jousting begins- Albee titles his first act “Fun and Games”- with Martha and George launching into their usual, nasty and emotional pas de duex even before Nick and Honey arrive on their doorstep.

“Poor Georgie-Porgie put-upon pie, are you sulking?” Martha goads her husband after he complains about the invited guests. He taunts her back for chewing her ice cubes like a cocker spaniel, and then he reminds her, “I’m six years younger than you are…I always have been and I will always be.”

The jabs are mere warm-ups for George and Martha. Theirs is a dark and stormy ride through the “sewer of this marriage,” as Martha calls it. The two rip each other to shreds, pulling Nick and Honey into their whirlwind of emotional debris, in an effort to strip away rosy fantasies the young couple might have about their own marriage.

The raging between George and Martha ends, finally, with George committing the ultimate transgression of destroying the main illusion that had long breathed light into their marriage, however dim and false it might have been. “It was time,” says George, as he comforts the anguished Martha and assures her, “It will be better.”

Maybe there’s some light, after all, at the end of this dirge-like “fugue.” The word well describes the bickering that circles and repeats between George and Martha, as well as the loss of identity and hysteria that accompany a psychological fugue state. 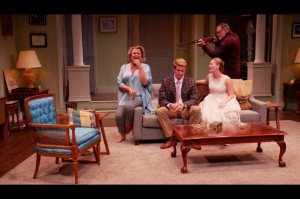 Able actors ignite the bitterness between George and Martha to the edge of our disgust but keep us from pulling away. Zimmer and Newman do so by shining technically, with each adding a fresh dimension to these familiar characters.

Newman makes the erudite George modulated and physically restrained, which seems right for a brooding university instructor whose career hasn’t met expectations. As Martha, Zimmer has more of an accessible vulnerability than you might expect. Rather than being a font of unrelentingly viciousness and fury, she seems more inner-directed, to heart-wrenching effect at the play’s end. We know women like her Martha. We’re understanding and empathetic to them despite their continual unhappiness.

Visiting actors Grant Tambellini and Olivia Howell appear as Nick and Honey. Each is fine as a still-evolving reflection of George and Martha. Tambellini has a tentative cockiness that’s not yet spent from professional disappointments and alcohol. Howell makes a believable “innocent abroad” in this house of horrors as she comes to realize it’s sucking her in.

Dan Foster directs this “Woolf” with energy and variety to keep everyone in motion, a suitable match to Albee’s shifting and multilayered language. Peter Waldron has designed a comfortable upper-middleclass home with the trappings of college-town domesticity befitting to George and Martha. Credit for that also goes to lighting designer Stephen Petrilli and costume designer Jessa-Raye Court.

It’s a polished and pleasing production that echoes last year’s “Other Desert Cities” at TWN, also directed by Foster 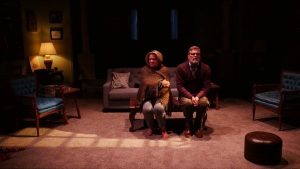