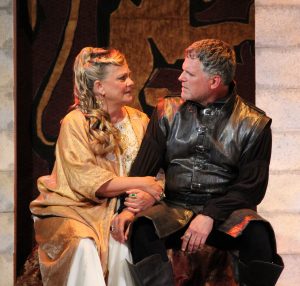 “When Robert Newman takes the stage as King Henry II in “Lion in Winter,” the audience spontaneously applauses before he even utters a word.

Not just because the man himself is royalty at The Barn — having started his career more than three decades ago at the beloved summer stock theater and returned again and again throughout a fruitful stage and screen career — but also because his Henry is regal, pompous, twisted, convincing, selfish, virile, and utterly charming.

Yet a king is nothing without his queen. And fellow guest star Kim Zimmer — Newman’s four-time Emmy Award-winning costar in daytime soap opera “Guiding Light” who has also made appearances on The Barn stage for decades — is “Medea to a T” as Henry accuses her, embodying the wit, grace, devilishness, and cunning scheming of the imprisoned aging Queen Eleanor, while also inspiring sympathy. She’s terribly devious, though deliciously so.” 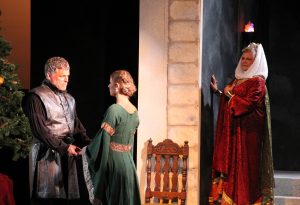 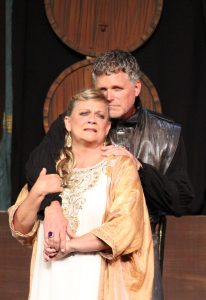