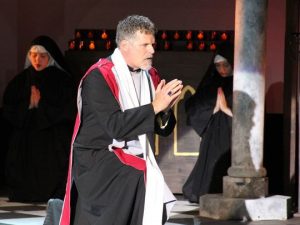 Tormented by trying to reconcile his fervent dedication to his faith and his uncontrollable desire for Esmeralda, a woman who represents everything he has tried to despise, Frollo is a walking contradiction, and Newman fully illuminates the man’s multiple facets. He demonstrates how smoothly kindness can slip into cruelty and how swiftly the sanctimonious and self-righteous can topple from their seemingly secure pedestals. When he puts his rumbling baritone into “Hellfire,” Frollo’s confession of his all-consuming lust (“But she will be mine, or she will burn”), Newman rattles the rafters and lets us know we are dealing with a genuinely dangerous soul careening scarily between mercy and mercilessness.

Newman, an Emmy-Award winning star of television’s daytime drama “Guiding Light” and frequent Barn guest, excels as Dom Frollo. Newman’s deft portrayal keeps the character vulnerable and relatable even as he wreaks havoc against the gypsies. The role also gives Newman a chance to show off his rich, thundering singing voice which was particularly powerful in “Hellfire.”